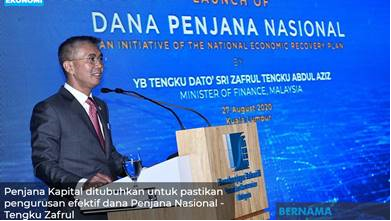 “Its board is made up of representatives from the MoF, various industries, private sector players and other relevant agencies.

“Interested investors may submit their application to Penjana Kapital in September 2020,” he said in his opening remarks at the launch of PNF here, today.

Speaking to reporters afterwards, he said Penjana Kapital was still receiving fund applications and the government would make a conclusion after the MoF Inc company has completed its assessment.

Tengku Zafrul said the response from international investors including those from the European Union and United States was encouraging.

In June this year, Tan Sri Muhyiddin Yassin announced the establishment of PNF with an allocation totalling RM1.2 billion in a bid to drive the country’s economic recovery via digitalisation of businesses.

The Prime Minister said RM600 million of the allocation would come from the government, and the other RM600 million from domestic and international investors.

Tengku Zafrul in his speech also said financing for Dana Penjana will be sourced from venture capital (VC) funds both local and foreign while the government would match the figure on a 1:1 basis but only upon their commitment.

“This will help enhance the nation’s economic growth by developing Malaysian businesses in high-impact sectors while at the same time, empowering them to push the boundaries of innovation,” he said.

Designed with a public-private collaborative structure in mind, Tengku Zafrul said PNF is well positioned to attract foreign private capital investment into promising Malaysian start-ups and small and medium-sized enterprises (SMEs) through a capital-matching programme. In fostering an entrepreneurial culture in Malaysia and to nurture the existing pipeline of entrepreneurs, he said Malaysia is well-poised to be a hub for start-ups through strong government support, a well-regulated capital market ecosystem, skilled workforce, cost-competitive environment for doing business and ready access to the Asean market. “Testament to this is Malaysia’s ranking in the 2018 Venture Capital and Private Equity Country Attractiveness Index, whereby Malaysia ranked 13 out of 125 countries assessed in this index,” he said.

The index measures investor- focused indicators such as economic activity, depth of the capital market, as well as the level of investor protection and corporate governance. The finance minister however said the size of VP investments in 2019 was impacted by global headwinds, dropping to RM566.3 million as compared to RM613.2 million in 2018. He added that total committed funds under management stood at RM6 billion for 2019. “While foreign and local institutional investors are still optimistic about Malaysia’s private markets, we must nevertheless ensure that it grows consistently,” he said.

Tengku Zafrul revealed that as at August this year, 125 VC and private equity (PE) firms have registered with the Securities Commission, managing an estimated total commitment of RM6 billion. — Bernama