PENJANA: A Venture to Build a Better Malaysia 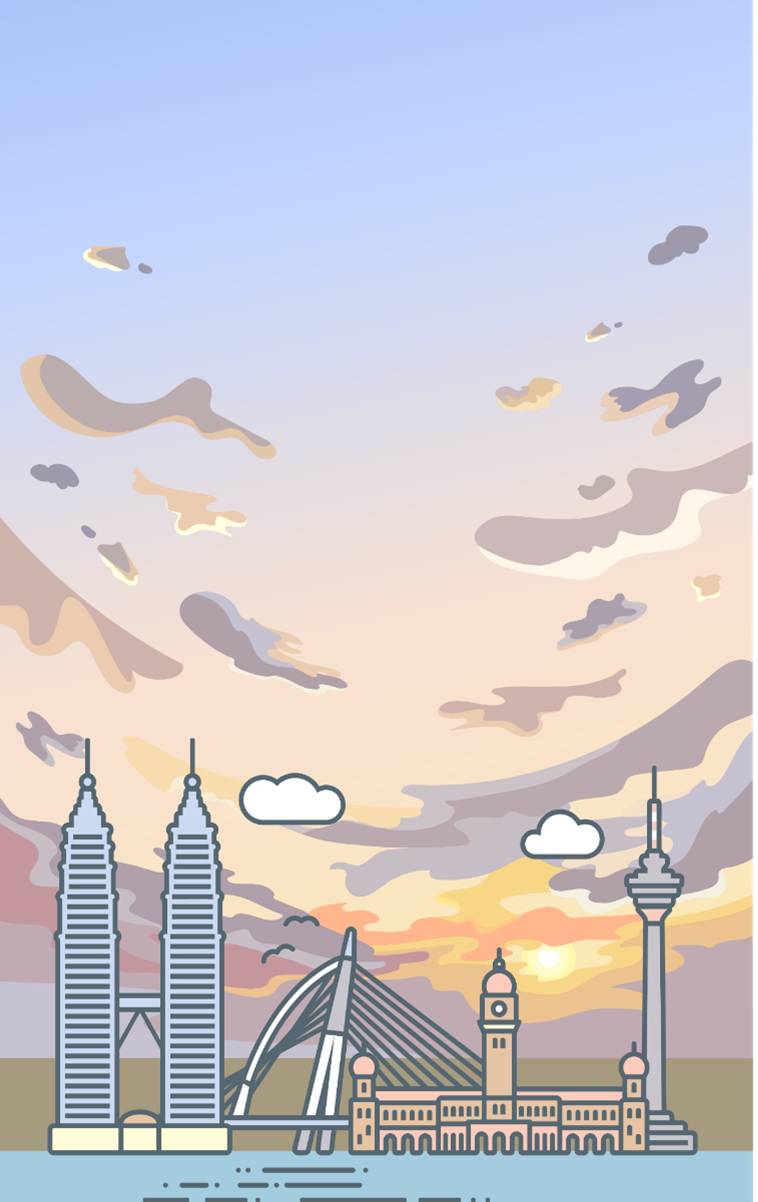 The government has been an essential player in nurturing and catalysing industry from the beginning. Its role in financing the technology sector underlying today’s Silicon Valley giants such as Apple and Google were elaborated by Mariana Mazzucato in her must-read book The Entrepreneurial State.

She asserts that the growth of these innovative companies is a product of government initiates what the private sector cannot. As an enthusiastic follower of Karl Polanyi, I see her view corresponds with Polanyi’s argument that the government plays a necessary role in opening the door to the free market: it organises and facilitates markets!

Our capitalism is in bad shape. The economic growth is still determined more by the policy of central banks and financial engineering than the animal spirits of entrepreneurial capitalism. Globally, people are angry about their poor income growth, rapid rise in the cost of living, as well as wider inequality of opportunities and wealth. People induct the “one percent” or “the establishment” for pursuing policies that benefit the rich at the expense of middle and working class. Pre-Covid pandemic, the age of cost cutting, cheap capital, and financial engineering through mergers and acquisitions, or demergers and disposals, only brought prosperity to selected few but that, as a result, everyone’s else expectations were revised downward. Capitalism has not been working well for the general people it is supposed to serve.

Covid has uncovered this ugly truth. The economics of pandemic as well as political anger clearly connect with the way capitalism has evolved over recent years. Capitalism has gradually been losing its dynamism and has become detached from the spirit of creative destruction. As a result, the growth trend has always been below true potential and one of failing productivity growth.

"Institutional capitalism" has changed the patterns of incentives and rewards in the economy, leading to slower growth of productivity and wages by reducing the capital investment that supports their growth. This capitalism has unfairly skewed the rewards to investors versus labour, because money has flowed to those seeking rents and not to entrepreneurs.

Those running our capitalism today are mostly institutional asset managers and financial institutions – they are third-party intermediaries and have cut the link between ownership on the one hand and corporate control as well as entrepreneurship on the other. This does not mean they are bad. But when companies are principally owned and controlled by owners who are short-term driven, and whose agendas are best arcane, capitalism turns grey.

The shift to short-termism, if left unchecked, may undermine the ethos of capitalism and may create a new class of companies without the "spirit". Under such scenario, the code that replaces the ethos of entrepreneurial and controlling ownership is one that heralds the vices rather than the virtues of capitalism. It shields companies against exposure to the uncertainty that is inherent in entrepreneurship, investment as well as innovation. It incentivises companies to seek the short and easy route to profit rather than the long and sustainable one. Because these institutions are large and their influence dominates many sectors, the effects are felt outside their investee companies and sectors. Ultimately, they impinge on the health of our market and economy.

When capitalism’s principles are upheld and its virtues are embraced, businesses thrive if owners and managers embrace uncertainty, challenge incumbents, and build value through creative destruction.

Today, innovation and entrepreneurship, which have become synonymous with Silicon Valley, are deemed critical in order to propel economic competitiveness and job creation. Acknowledging their importance, governments across the globe have turned their focus in the promotion of venture capital market to coordinate technological innovation. Venture capital funding is often referred to as "smart money" and "patient capital" because of the operational and technical expertise that comes with the long-term investment. They provide necessary amounts of equity funding along with operational expertise and extensive professional networks. Motivated to spur economic growth through greater innovation and job creation, Malaysian government has implemented Dana Penjana Nasional programme, focused on encouraging venture capital. Through the matching commitment, government is hopeful that Malaysia can compete for investment from internationally mobile capital holders and domestic private investors. This programme, which was introduced at the onset of Covid pandemic, attempts to encourage the development of venture capital and leverage on the quality of execution on the part of both government and private sector. Government has stepped in to catalyse local venture capital industry by supporting more market participants.

This reflects Malaysia’s desire to be a venture capital state. In the name of instigating the innovation and entrepreneurial activities that should spring spontaneously from unfettered capitalism (but never do because of persistent short-termism and broken incentive mechanism), Malaysian government is intervening for the same reasons that the US government acted to grow the venture capital industry that is now synonymous with Silicon Valley. Dana Penjana Nasional programme embodies the commitment to build local clusters of venture capital activity that are vibrant to support a vigorous recovery for a better Malaysia. 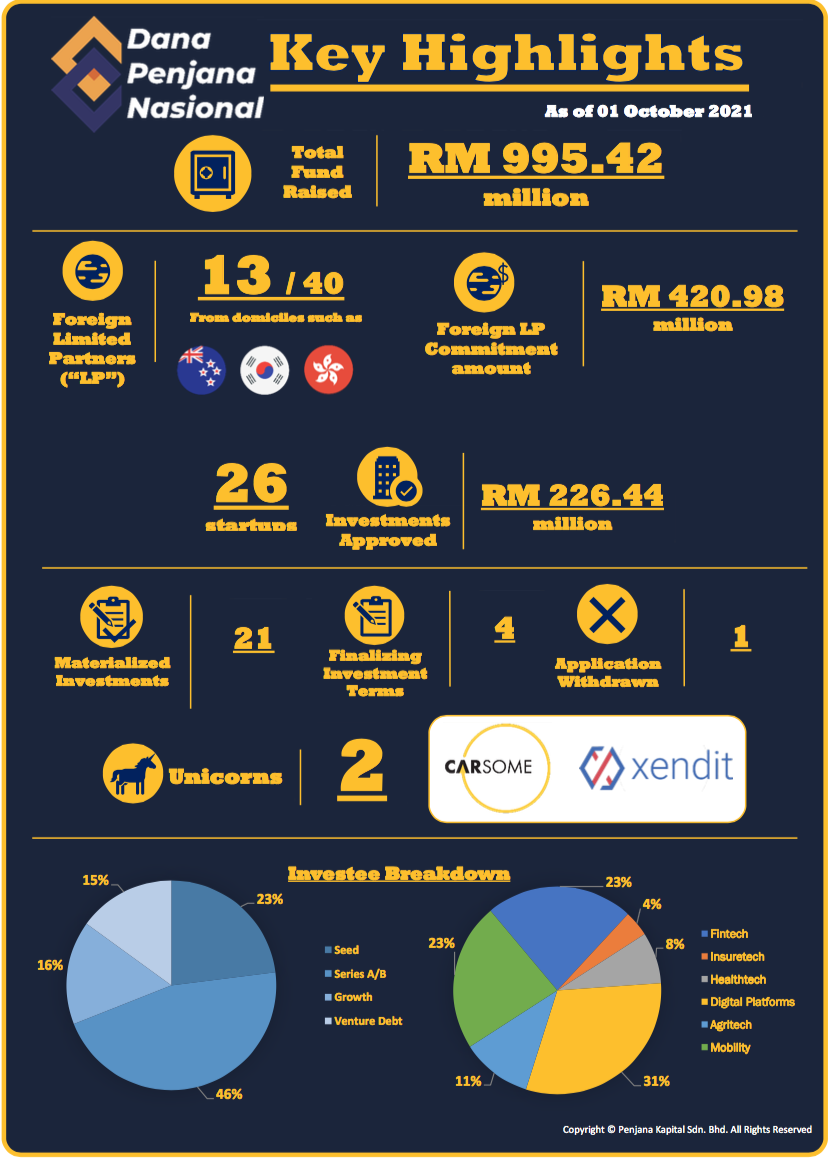 A Predictable Pattern of a Start Up

For many, the term start-up1 often conjures images of Silicon Valley, new frontier venture tech and casual office attire. However, few have given much thought into what the term entails.

What is a start-up anyway? How does one qualify as a start-up? And more importantly, what are the differentiating factors between a start-up and conventional SMEs?

While various school of thoughts exist, startups can be generally defined as companies or ventures that are focused on a single product or service that the founders want to bring to market. Often than not, these companies do not have a fully developed business model and, more crucially, lack adequate capital to move onto the next phase of business. They tend to also be funded by the founders themselves at inception.

So, what sets a start up apart from other SMEs?

Aulet & Murray (MIT Entrepreneurship) in 2013 proposed for 2 distinct types of enterprise, namely SME and IDE2. Both share many similarities but differ in a few key characteristics. (Table 1.0). The listed traits of an IDE are the same as some of the quintessential characteristics of a start-up. 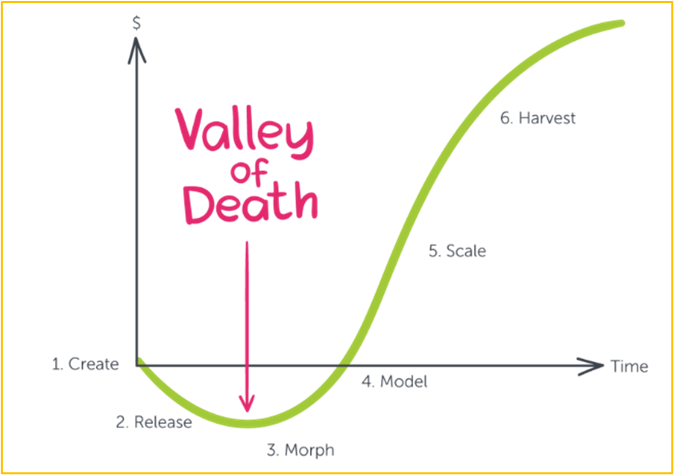 Due to the inherent nature of start-ups in relation to business philosophy and growth intent, (1) Revenue, (2) Job Creation, and/or (3) Cash-flow of a start-up will exhibit attributes of a J-Curve. Meanwhile, SMEs tend to have a linear curve.

A typical SME will begin operations post-business conception, utilising traditional business model to focus on revenue and profit. The SME will try to gain more market share through marketing tactics and price war.

On the flip side, start-ups are founded with the intention to disrupt the market with innovation with key focus on growth. However, innovation necessitates investments and expenses, resulting in zero revenue or losses during their first few years. The focus falls on R&D and ideations for product market fit while maintaining a sustainable burn rate. Therefore, both cash-flow and revenue of a start-up are usually in the red during the initial stages of the business. Meanwhile, job creation will only materialise in tandem with traction and growth.

Take Carsome for example, who according to Co-Founder Jiun Ee Teoh started operations with only 3 staffs in 2015. Most of their first 6 months were spent on R&D to determine product/market fit. Fast forward 6 years later, Carsome has grown to almost 2,000 staff members with operations in 4 countries.

To conclude, instead of debating amongst ourselves the qualitative attributes of a start-up, the J-Curve is based on data and can offer a more concise way to ascertain whether a company qualifies as a startup. Founders need to be aware of where they are on the J-curve. Similarly, it’s crucial for investors to appreciate the unique dynamics of venture capital investing as well as the “shape” of its return over time.

Carsome Sdn Bhd ("Carsome") is a Malaysian based online used car marketplace that aims to reshape and digitalize the used car industry. From inspection, ownership transfer to financing, Carsome is able to elevate user experience by offering convenience efficiently.

Since its inception, Carsome has registered more than 2.3 million bids for cars with 8,000 registered dealers, and 100 thousand cars sold on its platform. Furthermore, the startup went from 80 staffs and launching its first inspection center in 2016 to 1,600 team members with 32 inspection centers across ASEAN. The company’s growth is a strong testament to the value proposition and product market fit of Carsome’s business model. Thus, it is no surprise that Carsome had on September 2021 achieved the status of Malaysia’s first and largest tech unicorn. This comes after a US$ 170 million funding round which boosted Carsome’s valuation to US$ 1.30 billion (RM 5.43 billion3).

Carsome saw a gap or rather an opportunity to carve out its own niche in the secondary automotive market, its product market fit, and quality of services resulted in its rapid growth. The story of Carsome’s founder and CEO – Eric Cheng however is a stark contrast to the start-up. Having dabbled in various ventures including MLM and World of Warcraft gold farming, Eric lost all his money after several unsuccessful attempts at starting his own business.

We recently had the opportunity to meet up with Carsome’s CEO & Founder – Eric Cheng in Penjana Kapital’s maiden event Capital Connections. 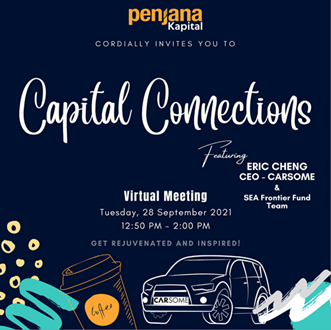 To commemorate Carsome’s success, we recently held our maiden event Capital Connections where more than 20 participants get to e-meet Carsome’s CEO & Founder – Eric Cheng and Co-Founder & Director Jiun Ee Teoh. During the event, Eric shared his personal journey and the trials and tribulations that Carsome overcame to elevate the company to the next level.

Here are some excerpts from our short but fruitful session with Eric (EC) and Jiun Ee (JE).

(Note: excerpts are paraphrased to be more concise)

Penjana Kapital is proud to have Carsome as one of our investee companies through our VC partners under the Dana Penjana Nasional mandate.